Formerly known as Box Distillery but rebranded in 2018, High Coast Distillery is named after its location in Adalen on the High Coast of north-eastern Sweden. In fact, it’s one of the world’s most northerly distilleries, located at a latitude of 63°N. The distillery is situated on the banks of the Ångermanälven River in a building that once housed the power plant for a wooden box factory, where the distillery’s initial name ‘Box’ originated.

High Coast has announced the release of five new single malts, that will be sold throughout Europe. Fields, Morris & Verdin (FMV) will handle the distribution in the UK. Four of these new whiskies will be available in store from this month, wil the fifth will follow in September.

High Coast Älv – Delicate Vanilla (RRP £50.00)
Älv means ‘River’ and is named for the Ångermanälven River the distillery sits on. 100% unpeated malt, the whisky was matured in bourbon casks for 6 years to create its elegant and delicate
profile.

High Coast Hav – Oak Spice (RRP £50.00)
Translated as ‘Sea’, Hav is a blend of 20% peated, 80% non-peated malt whisky. The whisky was aged in pre-matured in 40-litre casks in virgin American, Hungarian and Swedish oak for 3-4 months before it was transferred into bourbon barrels for 3-4 years to create its spicy and unorthodox flavours.

High Coast Timmer – Peat Smoke (RRP £50.00)
Timmer means ‘timber’ in Swedish and is made from 100% peated malt whisky. Matured in bourbon casks for 5 to 6 years to create its distinct peaty character.

High Coast Projekt 63 (RRP £110)
Aged for 63 months in 63 litre first-fill bourbon casks, this whisky has been aged on the 63rd parallel, 63 decimetres above ground.

High Coast Berg – (RRP £50.00, from September 2019)
Berg is ‘Mountain’ in Swedish. Made from 100% unpeated malt and matured in bourbon casks for 2 years before it is finished in PX casks for an additional 2 years creating a distinct and rich Sherry character. 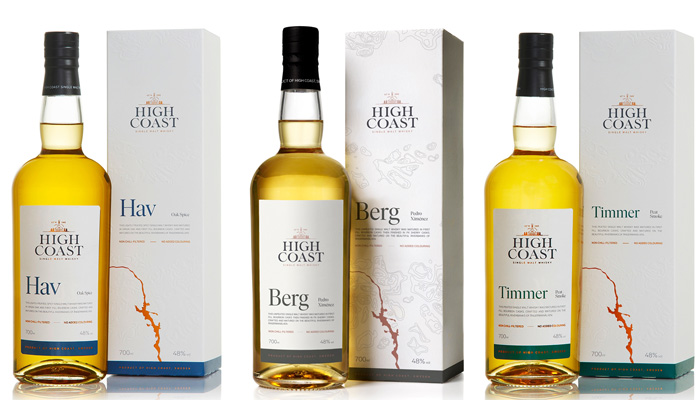