With the addition of our new regional flavour profiles, like this Islay profile, we got very curious to find out which whiskies have the most similarity to these regional profiles. So we did some math.

The whisky that represents its region the best is Redbreast 12 Year Old. It has the highest similarity percentage of all whiskies. And allthough it’s slightly more spicy and sherried than average, Redbreast 12 Year Old is the typical Irish whiskey, as you can see in the side-by-side comparison below. 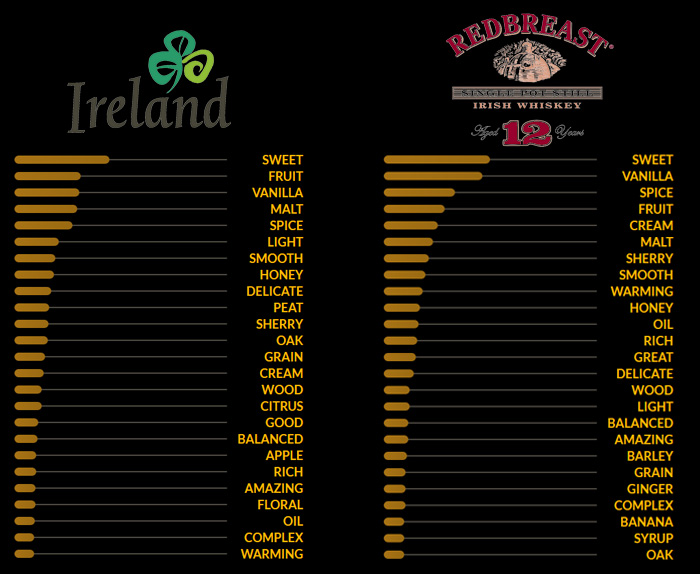 Typical Lowlands whisky Auchentoshan 12 Year Old has a much lower resemblance with its home region. This is probably due to the relatively low amount of Lowlands distilleries – only four distilleries in the southern Scottish region are still producing and selling whisky at the moment.

Calculating the average of an entire whisky region is very difficult. This is the most visible in the large Highlands region, where bold, sherried whiskies and more light, delicate whiskies co-exist. Try averaging that.

The Dalmore 12 Year Old shows a high overall similarity, but is heavily sherried. Old Pulteney 12 Year Old also has a high resemblance with the average Highlands flavours, but has a more maritime, salty character. Our best bet would be The Glenlivet 12 Year Old – a slightly lighter, Speyside whisky, with a surprisingly high amount of flavours that correspond with the Highlands average.

So why calculate the average then? Well, these ‘typical’ whiskies contain all local characteristics, making it the perfect regional entry whiskies. From there, you can fine tune your way up or down the ladder, to find the whisky that matches your personal preferences the best.