These are some of the most interesting new labels we spotted during the past few weeks:

Well, that sounds interesting. Where most Islay distilleries have added one or more sherried expressions to their product range, this is basically the other way around. It is a NAS Small Batch Release, bottled at 46% abv.

Just a few months after the release of Perpetuum, Ardbeg is already planning the next one. Dark Cove has been matured in dark sherry casks and will be ‘the darkest Ardbeg ever’. 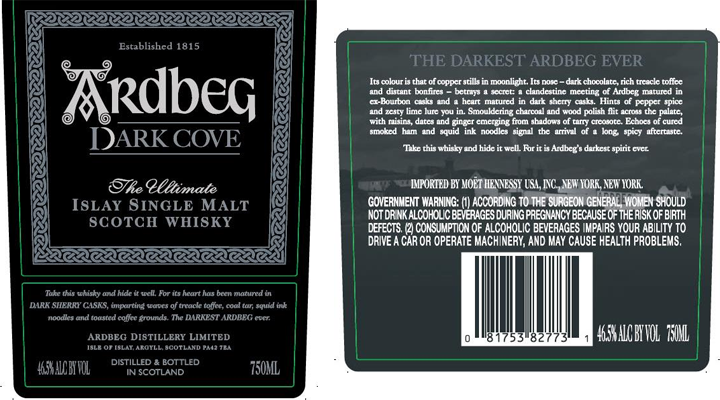 Balblair’s range of year-based releases will be extended with a 10 year old single malt that was distilled in 2005. The 1st release of this non-chill filtered whisky will probably be bottled later this year and early 2016.

The Bothy is a new cask strength release by the Arran Malt. It is limited to 12,000 bottles and, although the name may suggest otherwise, not a 100% quarter cask single malt. The Bothy is matured in first-fill ex-Bourbon barrels first, and spends 18 months in American oak quarter casks later.

The anCnoc Peaty Collection will welcome a new member: anCnoc Rascan. Just like the other peated anCnoc whiskies, it is named after a tool that is used to grow or harvest peat. AnCnoc Rascan is bottled at 46% abv and 11.1 ppm.